I am extremely proud to talk about our inaugural indigenous expedition to the Wirangu community of Scotdesco in South Australia.  I have been working with the community for almost 2 years now and this was the culmination of everyone’s hard work to get this trip off the ground and running successfully.

I was introduced to the community through an organisation called Many Rivers who work with marginalised communities across Australia, helping them to develop and sustain their own businesses in order to provide employment and revenue where possible.  The community at Scotdesco had a history of working the land, specifically as sheep farmers, and had also worked on saltbush farming and a milling operation.  Unfortunately, drought conditions led to hardship and these operations failing.

The community did have a small tourism operation established but it generally relied on passing traffic dropping in off the long and lonely, Eyre Highway, and this proved to be insufficient to sustain them.  With two accommodation blocks and a very well-equipped kitchen (including an awesome authentic Italian coffee machine!!), they had dabbled a little with school groups but lacked the support to generate enough traction to make it viable.  I recognised the huge potential this community had to offer, and working with the team from Many Rivers, we set about establishing an appropriate and exciting itinerary for school groups, building capacity within the community members themselves and of course got out and started selling these experiential learning trips to schools. 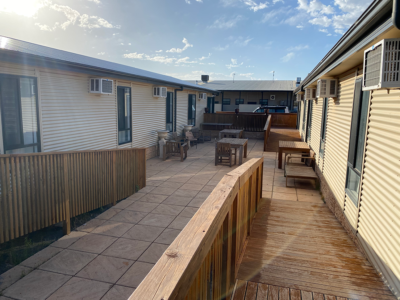 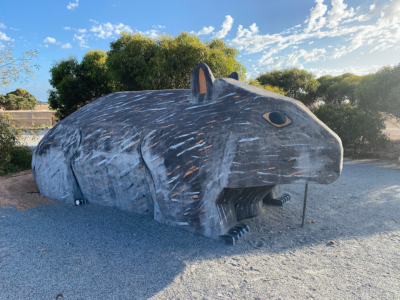 Despite the uncertainty, the expedition got early interest from North Geelong Secondary College in Victoria.  All credit must go to the two teachers at the school who encouraged their students to sign up, sustained enthusiasm despite Covid concerns. After navigating the many documents and permissions required in order to run the trip, to the final tests before departure – we were on our way  (thank you Darcy & Amy).

It is not about the time, it is about the journey

One of the challenges of this trip is the distances involved in getting there.  The community sits one hour’s drive west of Ceduna, which equates to about an 11 hour drive from Adelaide airport.  Teams can fly to reduce the driving distance, but the drive, whilst long, has plenty to see along the way and opportunities to stop and stretch the legs. 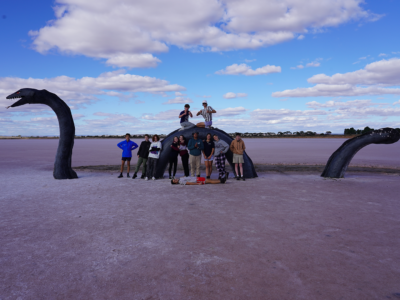 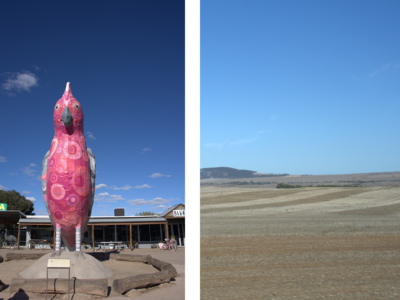 The first evening saw us taking in the vastness of the night sky and the incredible darkness which most city dwellers simply never see.  We talked about our expectations for the trip and specifically about our perceptions of indigenous people, and the lack of limited opportunities to meet aboriginal people.

Everyone was given the chance to talk about own their backgrounds, their culture and their connectedness to it.  It proved most of us were unconnected, not speaking our ancestral language or really understanding the key elements of our culture.  It also proved we were a mixed mob with ancestors from all corners of the globe.

One of the students had an indigenous background and for her this was a journey to understand “another mob” and by even signing up it had encouraged her mum to re-connect with her traditional language.

The aims of the trip were:

Every evening was a time for reflection, after our dinner, we would sit around the fire, reflect on our experiences of the day, as well as just yarn with each other under the stars.  Silly games of Mafia were played, and much fun was had the evening we made our own damper and then cooked it in the coals. 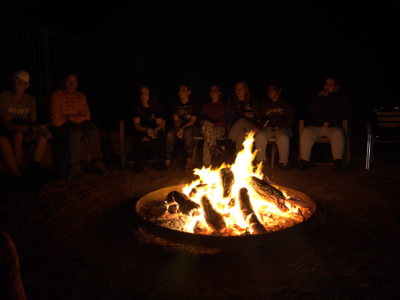 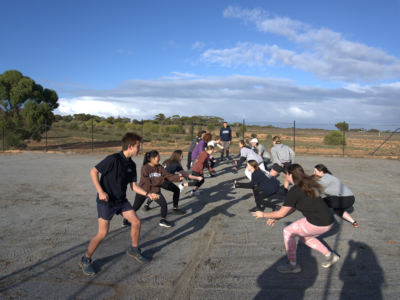 The expedition had so many wonderful activities to allow the students to fully immerse in the lifestyle of Australia’s traditional landowners.  This included:

Learning about Wombats “Wadu” –  in particular the Southern Hairy Nosed Wombat which is widespread across South Australia and why these nocturnal marsupials have square pooh.

Traditional Art Sessions -A key part of the trip was participating in some traditional art sessions which continued throughout the trip.  Students were introduced to the history of dot painting, its various symbols and importance to aboriginal peoples.  They took home personal and a school canvas (now proudly on display) depicting their own journey during the trip.

Carving boomerangs – The boys were also given the opportunity to carve and whittle their own boomerang to take home with them.  There was an impromptu throwing session just to check their aerodynamics were good – it proved they weren’t that good! 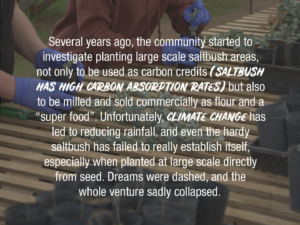 Saltbush planting – The community lands have been used for sheep farming for many decades now and when combined with many years of drought and climate stress, they are barren.  One plant that does grow relatively well in these conditions is saltbush which can be used to feed sheep on when grass is limited.

The community are now trying to establish a smaller scale project, nurturing seeds in a nursery before putting them out in the paddocks as young saplings.  The school team gained an insight into this and then went into the nursery to work, mainly taking cuttings from existing plants and planting them in small pots – well over a thousand of them

It is my hope that having school groups visiting will act as a catalyst to the community to re-establish their saltbush work, albeit on a smaller scale than previously envisaged.

Scarcity of water – It felt important while we were at Scotdesco, that we spent some time thinking about water, given its scarcity in the area and of course across huge swathes of Australia. Each of the places we visit taught us how precious water is, along with some survival techniques. 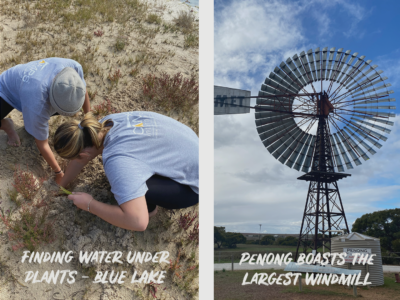 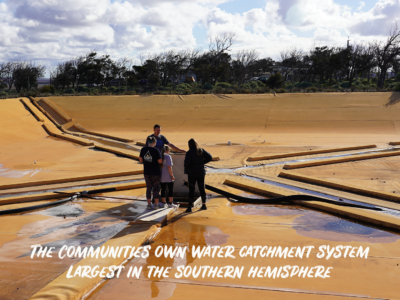 A very special afternoon was spent by the girls from the team who went to do “women’s business” out in the bush.  Aboriginal culture maintains traditional gender activities which are very important to them and it is considered taboo for these lines to become blurred.  Despite some initial concern that this was cementing stereotypes, the girls soon realised they were being treated to a very special and unique experience.  They went off into the bush with a number of the women, including Wanda, a community elder, to collect bush medicine.  But it was so much more than this.

Whilst they walked amongst the various bushes, identifying the different leaves and trees, they gained an insight into Wanda’s past.  They looked on aghast when they were shown the type of shelter Wanda would have slept in as her family moved across their “Country” and they listened to her yarns about life in the mission after she was taken from her family.

This was a once in a lifetime moment, listening, learning, growing as they hung off Wanda’s every word. When they returned to camp afterwards, they all seemed different; wiser, calmer, closer as a group.

They spent a few hours with what they had collected, cooking it up, mixing it and making their bush medicine.  Everyone was given a jar, that smelt eucalyptic, to take home – a great remedy for cold symptoms, best rubbed over feet with socks over the top. 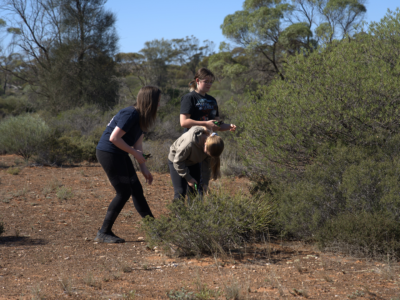 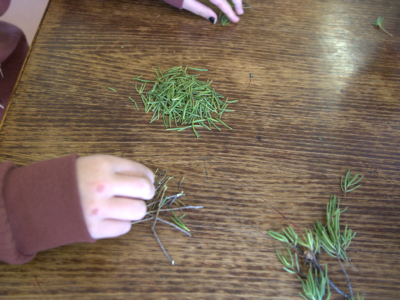 The Nullabour Plain and rugged coastline

Driving to the eastern edge of the Nullabour Plain, visiting ancient caves and then dropping into the Head of the Bight Whale Watching Centre was spectacular.  The team enjoyed clambering down into the last of three caves where they were initially fooled by a fake ancient handprint before being shown the very feint authentic one.  The Head of the Bight is an absolutely stunning place to visit, and the sheer scale of the Nullabour and its complete lack of trees makes for an awe-inspiring sight as we explored around.

We also had the opportunity to trek along the rugged exposed coastline which sits about 20kms south of the camp and backs onto the community land.  We saw various animal tracks as we walked as well as incredible views back along the coastline to some large ancient fauna footprints that had become exposed in the rocks.  The final 15 mins of the walk was along the beach at Clare Bay to the community’s shelter. Here there was a handful of community members already relaxing and we were all treated to another awesome BBQ lunch. 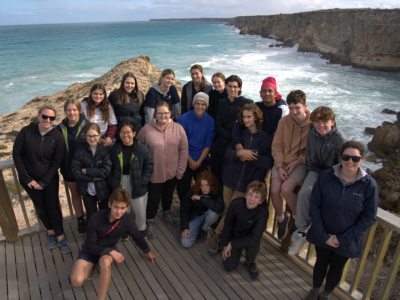 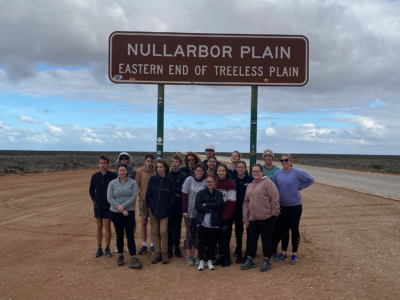 Wanda was there,  overseeing the preparation of a nearby fire to cook 5 or 6 kangaroo tails.  The team watched on in awe as Wanda handled the tails straight from the fire with no gloves.  The tail was opened, and everyone (well nearly everyone) had a taste, with some of the team really getting stuck in.  We headed down to the beach, to play beach games and spend some time with the younger community members who happily joined in with the games. 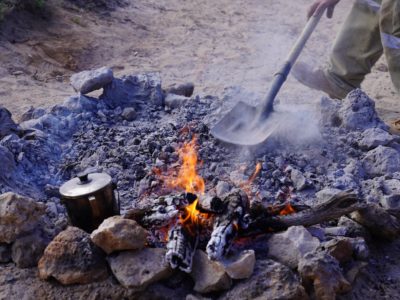 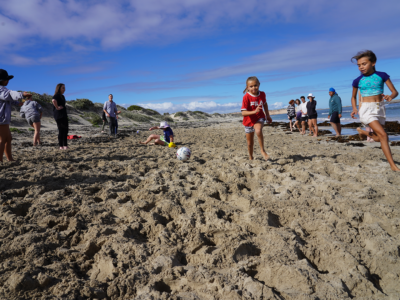 The final evening saw us sitting around the fire and reflecting on what we had learnt and experienced.  It was obvious from everyone’s comments that it had been a deeply moving and powerful experience on many different levels.  I have no doubt that everyone present will take away something very special from their time at Scotdesco.

The last day was the long drive back to Adelaide, but everyone was in a great space in their mind, relaxed and calmer than when they had arrived only a few days ago.

I would like to thank the community of Scotdesco and North Geelong Secondary College for making it such a special and worthwhile experience for everyone.

We can’t wait for our next lot of student travellers to experience their own journey with the inspiring Scotdesco community.

Indigenous Expeditions
Top of page Back to top 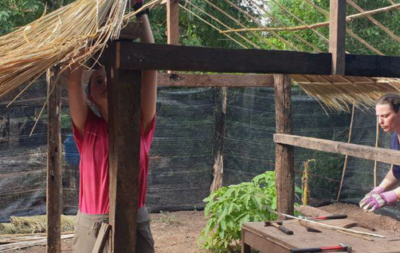 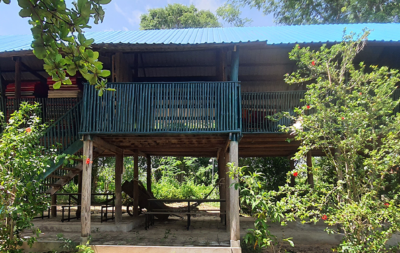 Written by: Rory Hall Part 2: Cambodia – "Home to the friendliest of people, lush green jungle and mystical temples." The second half of my trip was scheduled for 4… 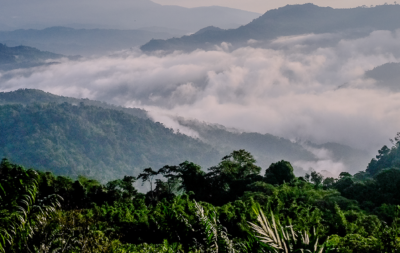 Travel is a beautiful and benefiting adventure, something over the past 2 years a lot of us have missed and a lot of countries and local communities have suffered as… 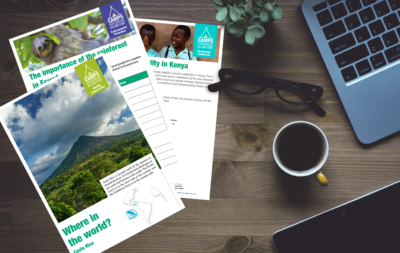 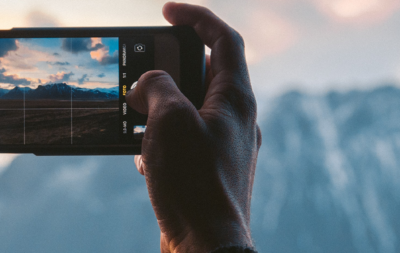